Vanessa Bryant, in Deposition, Describes Learning of Deaths of Kobe and Gianna

The morning started for Vanessa Bryant the way most weekends do for parents with busy children. One of her daughters was at a college prep class. Her husband was taking another daughter to a basketball game. She stayed home with the two youngest girls, a toddler and a newborn.

But then a family assistant knocked on the door around 11:30 a.m. that Sunday and told Bryant that her husband, Kobe Bryant, and their daughter Gianna had been in a helicopter accident, according to a transcript of a deposition of Bryant in a lawsuit between her and Los Angeles County.

The assistant said that five people had survived the crash that day, Jan. 26, 2020. Bryant said that she figured Kobe and Gianna would be among them and would be helping the other victims. But as she tried to call her husband, notifications began popping up on her phone: R.I.P. Kobe. R.I.P. Kobe.

“My life will never be the same without my husband and daughter,” Bryant said during the deposition. 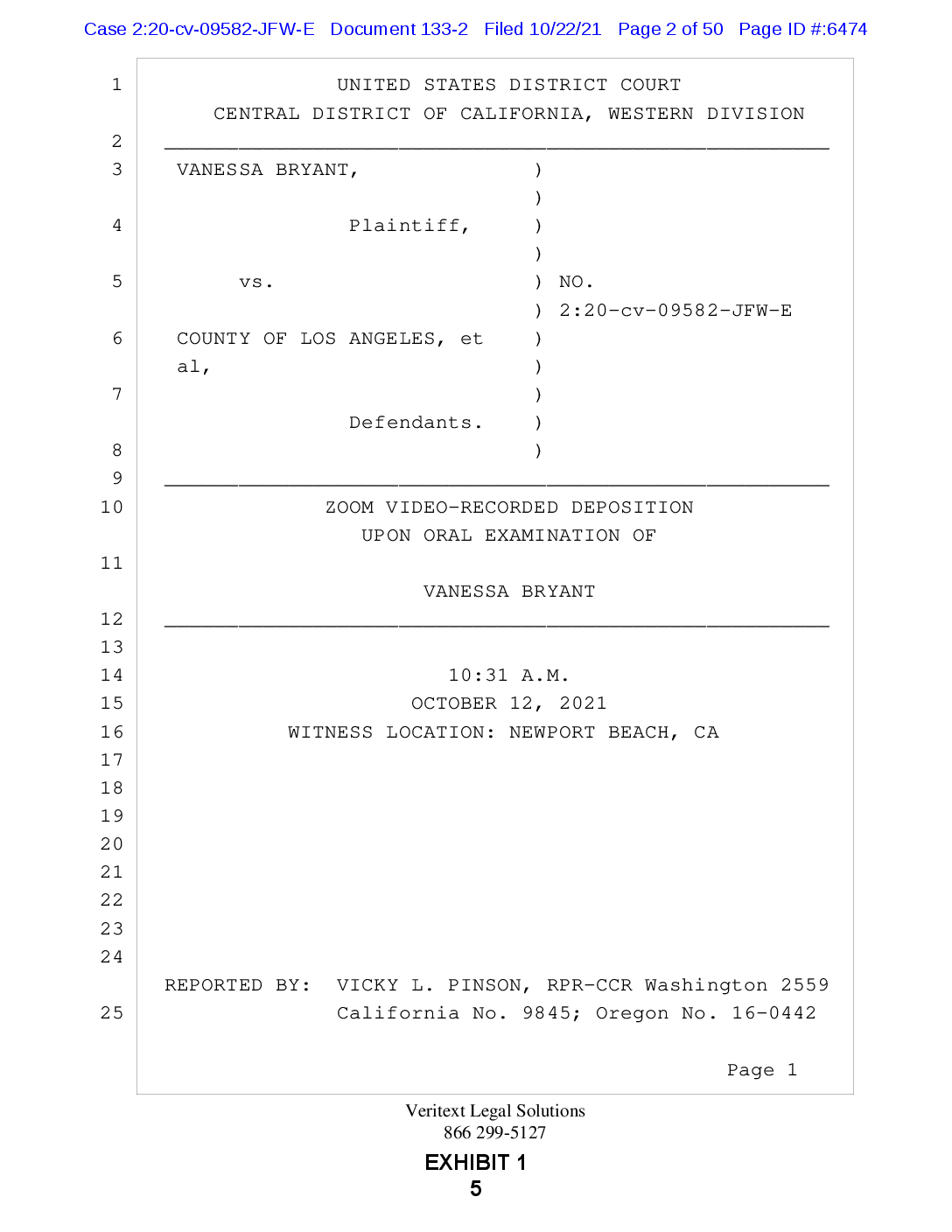 Bryant described the day of the helicopter crash that killed her husband, Kobe Bryant, and their daughter Gianna.

It would be hours before Bryant would learn, officially, that Kobe, 41, and Gianna, 13, had been killed along with seven others in a crash just outside Los Angeles. In her rush to get to the crash site, before she learned of their deaths, Bryant went to an airport in an attempt to secure a helicopter to take her — but was rebuffed because she was told the weather made it unsafe to fly.

These and many other details of that day have become public for the first time through questions Bryant answered during a videoconferencing meeting with a lawyer defending Los Angeles County. She is suing the county and some of its agencies and employees for emotional distress she said was caused by emergency medical workers who took and shared photos of the human remains at the helicopter crash site.

Kobe Bryant, the retired Los Angeles Lakers superstar, had been on his way to coach Gianna in a series of games at his Mamba Sports Academy in Thousand Oaks, Calif.

Vanessa Bryant’s deposition comes at a crucial point in the case and amid an escalating battle between the lawyers over the scope of what Los Angeles County and the other defendants can request of Bryant, other plaintiffs and witnesses.

One of the most contentious issues, the subject of numerous court filings in recent days, is whether the county can conduct what are called independent medical examinations, which involve psychiatric evaluations, of each of the plaintiffs.

Bryant’s lawyers argue that the examinations are “cruel” and that the county is sending a message by requesting them. “When public servants violate the privacy and constitutional rights of the citizens they swore to protect and serve, the victims must run a gauntlet to seek justice,” Bryant’s lawyers argued in one of the filings.

But the county contends that the examinations are “a routine part of the discovery process,” according to filings. Bryant and the other plaintiffs are arguing that they suffered emotional distress because of the actions of county employees, and the county believes a medical professional should be allowed to examine the extent of that suffering.

At times, Louis Miller, an attorney representing Los Angeles County, expressed remorse for asking Bryant invasive questions. “It’s not harassment,” Miller said at one point. “It’s just a lawsuit. And I’m so sorry to put you through this, but like I said at the beginning, I’ve got to do my job.”

“I shouldn’t have to be going through this,” Bryant responded. “It’s not just a lawsuit.”

Bryant said that after she was told that she could not fly to the crash site, she met up with Rob Pelinka, the Lakers general manager who served as Kobe’s agent during part of his N.B.A. career. Pelinka, Bryant said, drove them during the hour-and-forty-five-minute trip to the sheriff’s station in Malibu, near the crash site.

At the sheriff’s station, Bryant said “no one would answer” questions about her husband and daughter. She was escorted back and forth between rooms, and after a long wait, she said, a pastor walked in and then Los Angeles County Sheriff Alex Villanueva came with a publicist. Bryant said she wanted privacy and asked the publicist to leave the room.

Villanueva confirmed the deaths, Bryant said, and asked if he could do anything for her.

Miller asked Bryant if she was seeking a monetary judgment in the lawsuit.

Bryant expressed her desire to have the responders who took the pictures held accountable.

“The impact of the helicopter crash was so damaging, I just don’t understand how someone can have no regard for life and compassion, and, instead, choose to take that opportunity to photograph lifeless and helpless individuals for their own sick amusement,” Bryant said.

Miller asked again: “Ms. Bryant, I understand your testimony about accountability. My question to you is: Are you also seeking monetary recovery, damages, money, in this lawsuit?”

Bryant responded that it would be up to the jury.

Later in the deposition, Miller repeatedly asked Bryant to look at some graphic images and messages that had been sent to her on social media, some digitally altered, to make the point that others besides sheriff’s deputies were causing her emotional distress. Bryant, according to the deposition, put her hand in front of the camera and monitor instead of looking at the images. She said she interacted with fans less often on social media out of fear that she would be blindsided with pictures of the crash site.

Bryant said she recovered the clothes that Kobe and Gianna wore during the crash over concerns that people would take photos of them.

“They suffered a lot,” Bryant said during the deposition. “And if their clothes represent the condition of their bodies, I cannot imagine how someone could be so callous and have no regard for them or their friends and just share the images as if they were animals on the street.”

The sides are also fighting over whether Villanueva and Daryl Osby, the Los Angeles County fire chief, should sit for depositions.

Villanueva has gained public prominence in the last few years in part because his department handled high-profile cases like the helicopter crash, and a car crash in which the golf star Tiger Woods was injured. As he prepares for re-election next year, Villanueva has been accused of targeting political enemies and has fought with city councilors and watchdog groups.

The defendants contend that, as department heads, Osby and Villanueva generally are not subject to depositions, and that they do not have any specialized knowledge that other fire and law enforcement officials who have already been deposed do not have. But in an email, lawyers for Bryant listed 14 different reasons they believe Villanueva should have to sit for a deposition, mostly relating to how he handled the possession of photos of the crash site by sheriff’s deputies.

After the requests to medically examine all plaintiffs, 10 of them, including all of the young children involved, have recently exited the case. Two families settled with the county last week, the terms of which have not been disclosed. And while Christopher Chester, whose wife, Sarah, and daughter Peyton died in the crash, is continuing his lawsuit, he has dismissed his surviving children as plaintiffs.

The sides are also fighting over the scope of witness interviews, and which documents those witnesses must produce.

Bryant listed a number of witnesses to the emotional distress she said she has experienced, including Rob and Kristin Pelinka; the pop star Ciara Wilson; the television host and actress La La Anthony; the R&B singer Monica Arnold, known more popularly as Monica; Sharia Washington, Kobe Bryant’s sister; and Catherine Gasol, the wife of the former N.B.A. player Pau Gasol.

All of those witnesses are being scheduled for depositions, and they are being asked to produce volumes of documents. The subpoena issued to Wilson, for instance, asked for all documents and communications related to Bryant’s emotional distress between Wilson and Bryant or anybody else since 2010 — 10 years before the crash. It also sought all documents and communications between Wilson and Bryant about any topic since the day of the crash, and all of Wilson’s communications with others about Bryant since the day of the crash.

“Defendants’ document requests are grossly overbroad,” a lawyer for the witnesses wrote in an email on Monday that was submitted to the court.

“As we have discussed, the document requests are not overbroad,” a lawyer for the county responded, though they did later agree that witnesses wouldn’t have to turn over all of their communications with Bryant since the crash, just the communications about her mental state going back to 2010.

Some of these issues and others could be resolved in the coming days. The judge has scheduled hearings for Oct. 29 and Nov. 5 to rule on some motions.