A story in 3 acts

Here at Ravelin we have a lot of data with a lot of timestamps. Most of the timestamps are stored as strings in BigQuery, and most of our Go structs represent time with the Go time.Time type.

It turns out this is pretty easy. time.Parse has two parameters: one that describes the format of the data to parse, and another that is the data string that needs parsing. The format parameter does not just select a dedicated parsing routine appropriate for that format. The format parameter describes how the data should be parsed. time.Parse not only parses the time, but has to parse, understand and implement a description of how to parse the time. If we write a dedicated parsing routine that just parses RFC3339 it should be faster than that.

But before we start, let’s just write a quick benchmark to see how fast time.Parse is.

Here are the results.

Now we can write our dedicated RFC3339 parsing function. It’s boring. It isn’t pretty. But (as far as I can tell!) it works.

(It really is quite long and not very pretty, so rather than include it in this post and make you all scroll past it, here is a link to the final version with all the optimisations discussed below applied. If you imagine a great long function with quite a few calls to strconv.Atoi you’ll get the picture)

If we tweak our benchmark to use our new parsing function we get the following results.

Of course we’re not done.

If we get a CPU profile we see lots of our time is now taken in calls to strconv.Atoi.

strconv.Atoi converts numbers in ASCII strings to integers. That’s a fundamental part of the Go standard library, so it’s bound to be really well coded, and optimised already. Surely we can’t improve on that?

Well, most of our numbers are exactly 2 bytes long or exactly 4 bytes long. We can write number parsing functions that take advantage of these facts and don’t have any of those nasty slow for-loop things.

If we run our benchmark again we can see we’ve made a nice further improvement.

Of course we’re not done.

Ah, but let’s just have another look at the CPU profile. And let’s take a look at the disassembly. There are two slice length checks in atoi2 (they’re the calls to panicIndex seen in the green disassembly below). Isn’t there a trick about that? 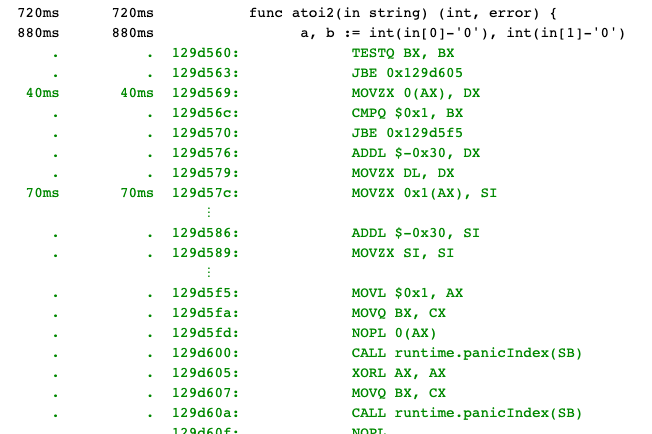 Here’s the code updated with the trick. _ = in[1] at the start of the function gives the compiler enough of a hint that it doesn’t check the string is long enough each time we reference it later on.

A small change, but enough to give a definite improvement

And atoi2 is very short. Why isn’t it inlined? Perhaps if we simplify the error it will be? If we remove the call to fmt.Errorf and replace it with a simple error that reduces the complexity of our atoi functions. This might be enough to allow the Go compiler to decide to implement these functions not as separate code blocks but directly within the calling function.

This is indeed the case and yields a signficant improvement.

That’s the end of our story. Quite a lot of work for around ~120ns. But nanoseconds add up, and these improvements reduce the running time of some of Ravelin’s machine learning feature extraction pipelines by an hour or more. As I said, we do have a lot of data and a lot of timestamps!