Space Debris Has Hit And Damaged The International Space Station

The inevitable has occurred. A piece of space debris too small to be tracked has hit and damaged part of the International Space Station - namely, the Canadarm2 robotic arm.

The instrument is still operational, but the object punctured the thermal blanket and damaged the boom beneath. It's a sobering reminder that the low-Earth orbit's space junk problem is a ticking time bomb.

Obviously space agencies around the world are aware of the space debris problem. Over 23,000 pieces are being tracked in low-Earth orbit to help satellites and the ISS avoid collisions - but they're all about the size of a softball or larger.

Anything below that size is too small to track, but travelling at orbital velocities can still do some significant damage, including punching right through metal plates. 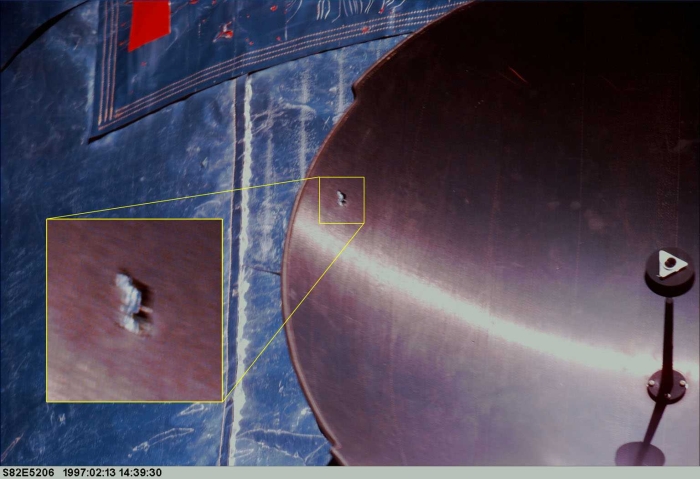 An impact hole left in the Hubble Space Telescope antenna in 1997. (NASA)

Canadarm2 - formally known as the Space Station Remote Manipulator System (SSRMS), designed by the Canadian Space Agency - has been a fixture on the space station for 20 years. It's a multi-jointed titanium robotic arm that can assist with maneuvering objects outside the ISS, including cargo shuttles, and performing station maintenance.

It's unclear exactly when the impact occurred. The damage was first noticed on 12 May, during a routine inspection. NASA and the CSA worked together to take detailed images of and assess the damage.

"Despite the impact, results of the ongoing analysis indicate that the arm's performance remains unaffected," the CSA wrote in a blog post. "The damage is limited to a small section of the arm boom and thermal blanket. Canadarm2 is continuing to conduct its planned operations."

Although the ISS seems to have gotten lucky this time, the space debris problem does seem to be increasing. Last year, the ISS had to perform emergency maneuvers three times in order to avoid collisions with space debris at its altitude of around 400 kilometers (250 miles).

Ever since the launch of Sputnik 1 in 1957, space debris has been accumulating. According to a report from the European Space Agency, an estimated 130 million fragments of anthropogenic material smaller than a millimeter are orbiting Earth right now. That estimate does not include natural space dust.

"To continue benefiting from the science, technology and data that operating in space brings, it is vital that we achieve better compliance with existing space debris mitigation guidelines in spacecraft design and operations," said head of the ESA's Space Debris Office Tim Florer last year.

"It cannot be stressed enough - this is essential for the sustainable use of space."

Robotics operations on the ISS using the Canadarm2 will continue as planned for the near future, the CSA said. But both space agencies will continue to gather data in order to perform an analysis of the event, both to understand how it occurred, and to assess future risk.