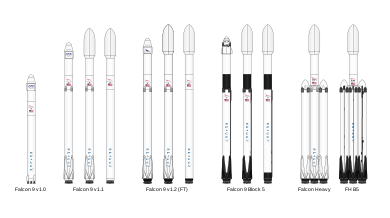 A Falcon 9 first-stage booster is a reusable rocket booster used on the Falcon 9 and Falcon Heavy orbital launch vehicles manufactured by SpaceX. The manufacture of first-stage booster constitutes about 60% of the launch price of a single Falcon 9 (and three of them over 80% of the launch price of a Falcon Heavy), which led SpaceX to develop a program dedicated to recovery and reuse of these boosters for a significant decrease in launch costs. After multiple attempts, some as early as 2010, at controlling the reentry of the first stage after its separation from the second stage, the first successful controlled landing of a first stage occurred on 22 December 2015, on the first flight of the Full Thrust version. Since then, Falcon 9 first-stage boosters have been landed and recovered 83 times out of 94 attempts, including synchronized recoveries of the side-boosters of the Falcon Heavy test flight, Arabsat-6A, and STP-2 missions. One out of three Falcon Heavy center boosters landed softly but it was severely damaged during transport.

In total 26 recovered boosters have been refurbished and subsequently flown a second time including several boosters with three to seven missions and one booster with nine and ten missions each. SpaceX intentionally limited Block 3 and Block 4 boosters to flying only two missions each,[1][2] but the company indicated in 2018 that they expected the Block 5 versions to achieve 10 flights, each with only minor refurbishment.[3]

Booster names are a B followed by a four-digit number. The first Falcon 9 version, v1.0, had boosters B0001 to B0007. All following boosters were numbered sequentially starting at B1001.

Block 5 is the final iteration of the Falcon 9 and Falcon Heavy boosters. Changes include a stronger heat shield, upgraded engines, new carbon composite sections (landing legs, engine sections, raceways, RCS thrusters and interstage), retractable landing legs, titanium grid fins, and other additions that simplify refurbishment and allow for easier reusability. SpaceX claims that a Block 5 booster can fly ten times or more. On May 9, 2021, during the Starlink-L27 mission, B1051 was the first to complete ten launches and landings and is currently the booster fleet leader[4]. B1049, first launched in September 2018, is the oldest and earliest launched of the active Falcon 9 boosters, and has completed 9 launches and landings as of May 4, 2021[5]. Three Block 5 boosters have been expended; six have been lost due to failed landings, destruction on ocean impact, or being lost during recovery. SpaceX built 6 boosters in 2018, 7 in 2019 and 5 in 2020.[citation needed]

Full Thrust up to Block 4

Falcon 9 Full Thrust (or sometimes called Falcon 9 version 1.2) was the first version of the Falcon 9 to successfully land. Changes included a larger fuel tank, uprated engines and superchilled propellant and oxidizer to increase performance. Five different versions of Full Thrust have been produced, Block 1 to 4 (all retired) are found in this list while the active Block 5 is listed separately. Block 4 was a test version that included new hardware like titanium grid fins later used for the next and final major version of the Falcon 9, Block 5. Flights of all Falcon 9 rockets up to Block 4 were limited to 2 flights only, with a total of 14 second flights of these variants. The boosters were either retired or expended after that second launch.

Since no data is provided, F9s listed as simply "FT" (Full Thrust) denote Blocks 1 to 3, while Block 4 is listed as "FT Block 4". All boosters are Falcon 9s, unless otherwise noted. Boosters B1023 and B1025 were Falcon 9 boosters, which were converted to Falcon Heavy side boosters for the Falcon Heavy test flight.

These boosters were the first 2 major versions of the Falcon 9. Version 1.0 of the Falcon 9 was the first version. The Falcon 9 looked very different from what it does today and it was much smaller and had much less power. On the maiden flight and second flight of V 1.0, SpaceX included basic recovery hardware (parachutes) to try and recover the booster. However, the boosters broke up on re-entry due to aerodynamic forces both times, SpaceX gave up on parachutes and decided to pursue propulsive landings instead. First came some controlled water landings, then came the attempts on the drone ship "Just Read the Instructions 1". None of these boosters were recovered or survived landing after an orbital launch. Two test devices made several short flights each.

Rockets from the Falcon 9 family have been launched 120 times over 11 years, resulting in 118 full mission successes (98%), one partial success (SpaceX CRS-1 delivered its cargo to the International Space Station (ISS), but a secondary payload was stranded in a lower-than-planned orbit), and one failure (the SpaceX CRS-7 spacecraft was lost in flight). Additionally, one rocket and its payload Amos-6 were destroyed before launch in preparation for an on-pad static fire test.

The first rocket version Falcon 9 v1.0 was launched five times from June 2010 to March 2013, its successor Falcon 9 v1.1 15 times from September 2013 to January 2016, and the latest upgrade Falcon 9 Full Thrust 97 times from December 2015 to present, 41 of which using a re-flown first stage booster. Falcon Heavy was launched once in February 2018, incorporating two refurbished first stages as side boosters, and then again in April and June 2019, the June 2019 flight reusing the side booster from the previous flight. The final "Block 4" booster to be produced was flown in April 2018, and the first Block 5 version in May 2018. While Block 4 boosters were only flown twice and required several months of refurbishment, Block 5 versions are designed to sustain 10 flights with just inspections.[3]

This chart displays the turnaround time, in months, between two flights of each booster. As of May 2021 the shortest turnaround time was 27 days, for the fifth flight of B1060. Boosters that are still likely to be re-used (active fleet) are highlighted in bold and with an asterisk.

This chart shows the current inventory of Block 5 boosters. How often they have flow and if they are still active, expended or destroyed.

This timeline displays all launches of Falcon 9 boosters starting with the first launch of Full Thrust. Active boosters that are expected to make additional flights in the future are marked with an asterisk. Single flights are marked with vertical lines. For boosters having performed several launches bars indicate the turnaround time for each flight. 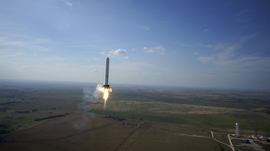 Grasshopper began flight testing in September 2012 with a brief, three-second hop, followed by a second hop in November 2012 with an 8-second flight that took the testbed approximately 5.4 m (18 ft) off the ground, and a third flight in December 2012 of 29 seconds duration, with extended hover under rocket engine power, in which it ascended to an altitude of 40 m (130 ft) before descending under rocket power to come to a successful vertical landing.[136] Grasshopper made its eighth, and final, test flight on 7 October 2013, flying to an altitude of 744 m (2,441 ft) before making its eighth successful vertical landing.[137] Grasshopper is now retired.[122] 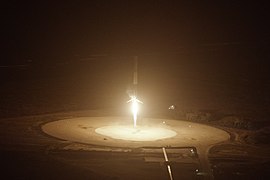 Falcon 9 B1019 immediately before landing on Landing Zone 1

Falcon 9 B1019 was the first Full Thrust booster, and was first launched on 22 December 2015 for Falcon 9 flight 20 and landed on the Landing Zone 1 (LZ-1). It became the first orbital-class rocket booster to perform a successful return to launch site and vertical landing.[138][139][140]

SpaceX decided not to fly the B1019 again.[141] Rather, the rocket was moved a few miles north, refurbished by SpaceX at the adjacent Kennedy Space Center, to conduct a static fire test. This test aimed to assess the health of the recovered booster and the capability of this rocket design to fly repeatedly in the future.[142][138] The historic booster was eventually displayed outside SpaceX headquarters in Hawthorne, California. 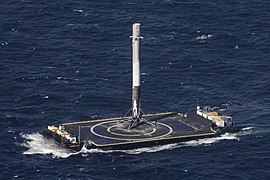 Falcon 9 B1021 aboard the Of Course I Still Love You drone ship after landing from the SpaceX CRS-8 mission.

Falcon 9 B1021 was the first booster to be re-flown. It was first launched on 8 April 2016 carrying a Dragon spacecraft and Bigelow Expandable Activity Module (BEAM) on the SpaceX CRS-8 mission and landed on an autonomous spaceport drone ship (ASDS). After recovery, inspections and refurbishing, it was launched again on 30 March 2017 for the SES-10 mission and recovered successfully a second time. This event marks a milestone in SpaceX's drive to develop reusable rockets and reduce launch costs.[69][143][144][145][146] Following the second flight, SpaceX stated that they plan to retire this booster and donate it to Cape Canaveral for public display.[147][148]

B1046 was the first Block 5 Falcon 9, the final version of the SpaceX first stage. It was first launched on 11 May 2018, carrying Bangabandhu-1, Bangladesh's first geostationary communications satellite. This marked the 54th flight of the Falcon 9 and the first flight of the Falcon 9 Block 5.[149] After completing a successful ascent, B1046 landed on the drone ship Of Course I Still Love You. After inspection and refurbishment, B1046 was launched a second time on 7 August 2018, carrying the Telkom-4 (Merah Putih) satellite. The Telkom-4 mission marked the first time an orbital-class rocket booster launched two GTO missions. This was also the first re-flight of a Block 5 booster.[150] Four months after the Telkom-4 mission, B1046 arrived at Vandenberg Air Force Base to support the SSO-A mission. Following delays for additional satellite checks,[151] liftoff occurred from SLC-4E on 3 December 2018. This marked the first time that the same orbital-class booster flew three times.[152] Its fourth and last mission launched a Crew Dragon capsule up to the point of maximum dynamic pressure, where it separated to test its abort system in flight.

B1048 was the third Falcon 9 Block 5 to fly and the second Block 5 booster to re-fly, and the first booster ever to be launched four, then five times. During the last launch, an engine shut down seconds before the planned shutdown, becoming only the second time a Merlin engine failed since the failure during the SpaceX CRS-1 in October 2012. The primary mission was unaffected and the Starlink payload deployed successfully,[153] further confirming the reliability of the rocket due to redundancy of the engines. With reduced fuel, B1048 was unable to sufficiently slow down its descent, and thus was unable to land.[154]

B1049 is the oldest Falcon 9 booster that is still on active duty. It was the first to successfully launch and land seven times, and the second to launch and land nine times respectively. It launched two commercial payloads, Telstar 18V and the eighth Iridium NEXT batch, and seven internal Starlink batches.[155]

B1051 is the sixth Falcon 9 Block 5 booster built. It first flew on March 2, 2019, on the DM-1 mission. It then flew its second mission out of Vandenberg AFB launching the Radarsat constellation. It then flew 4 Starlink missions and launched SXM-7, totaling 5 flights in 2020 alone, and becoming the first Falcon 9 to launch a commercial payload on its 7th flight. On May 9, 2021, B1051 became the first booster to launch and land successfully ten times and is the current Falcon re-use leader.

Falcon 9 B1058 and Dragon rolling out to the launch pad, bearing the NASA "worm" logo.

Falcon 9 B1061 first launched Crew-1 to the ISS in November 2020, the first operational flight of Crew Dragon. Following a landing on a drone ship the booster was reused on Crew-2 in April 2021, making it the first booster reuse on a crewed flight.[157]