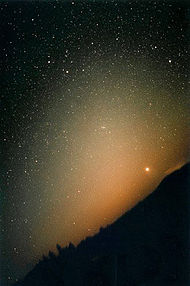 Zodiacal light in the eastern sky before dawn twilight begins

The zodiacal light (also called false dawn[1][2][3] when seen before sunrise) is a faint, diffuse, and roughly triangular white glow that is visible in the night sky and appears to extend from the Sun's direction and along the zodiac, straddling the ecliptic.[4] Sunlight scattered by interplanetary dust causes this phenomenon. Zodiacal light is best seen during twilight after sunset in spring and before sunrise in autumn, when the zodiac is at a steep angle to the horizon. However, the glow is so faint that moonlight and/or light pollution outshine it, rendering it invisible.

The brightness of zodiacal light decreases with distance from the Sun. In naturally dark night skies, the glow is visible as a band along the entire zodiac, completely straddling the ecliptic. In fact, zodiacal light spans the entire sky and largely[5] contributes to the total natural light in a clear and moonless night sky. Another phenomenon – a faint but slightly brighter oval glow – directly opposite of the Sun is the gegenschein, which is caused by backscattered sunlight.

The interplanetary dust in the Solar System collectively forms a thick, pancake-shaped cloud called the zodiacal cloud, which straddles the ecliptic plane. The particle sizes range between 10 and 300 micrometres, implying masses from one nanogram to tens of micrograms.[6][7]

The Pioneer 10 spacecraft observations in the 1970s linked zodiacal light with the interplanetary dust cloud in the Solar System.[8] 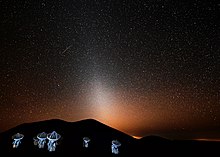 In the mid-latitudes, the zodiacal light is best observed in the western sky in the spring after the evening twilight has completely disappeared, or in the eastern sky in the autumn just before the morning twilight appears. The zodiacal light appears as a column, brighter at the horizon, tilted at the angle of the ecliptic. The light scattered from extremely small dust particles is strongly forward scattering, although the zodiacal light actually extends all the way around the sky, hence it is brightest when observing at a small angle with the Sun. This is why it is most clearly visible near sunrise or sunset when the sun is blocked, but the dust particles nearest the line of sight to the sun are not. The dust band that causes the zodiacal light is uniform across the whole ecliptic.

The dust further from the ecliptic is almost undetectable except when viewed at a small angle with the sun. Thus it is possible to see more of the width at small angles toward the sun, and it appears wider near the horizon, closer to the sun under the horizon.

The source of the dust has been long debated. Until recently, it was thought that the dust originated from the tails of active comets and from collisions between asteroids in the asteroid belt.[10] Many of our meteor showers have no known active comet parent bodies. Over 85 percent of the dust is attributed to occasional fragmentations of Jupiter-family comets that are nearly dormant.[11] Jupiter-family comets have orbital periods of less than 20 years[12] and are considered dormant when not actively outgassing, but may do so in the future.[13] The first fully dynamical model of the zodiacal cloud demonstrated that only if the dust was released in orbits that approach Jupiter, is it stirred up enough to explain the thickness of the zodiacal dust cloud. The dust in meteoroid streams is much larger, 300 to 10,000 micrometres in diameter, and falls apart into smaller zodiacal dust grains over time. 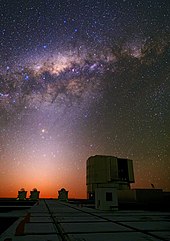 Colorful center of the Milky Way and the zodiacal light above the Very Large Telescope.[14]

The Poynting–Robertson effect forces the dust into more circular (but still elongated) orbits, while spiralling slowly into the Sun. Hence a continuous source of new particles is needed to maintain the zodiacal cloud. Cometary dust and dust generated by collisions among the asteroids are believed to be mostly responsible for the maintenance of the dust cloud producing the zodiacal light and the gegenschein.

Particles can be reduced in size by collisions or by space weathering. When ground down to sizes less than 10 micrometres, the grains are removed from the inner Solar System by solar radiation pressure. The dust is then replenished by the infall from comets. Zodiacal dust around nearby stars is called exozodiacal dust; it is a potentially important source of noise for directly imaging extrasolar planets. It has been pointed out that this exozodiacal dust, or hot debris disks, can be an indicator of planets, as planets tend to scatter the comets to the inner Solar System.

In 2015, new results from the secondary ion dust spectrometer COSIMA on board the ESA/Rosetta orbiter confirmed that the parent bodies of interplanetary dust are most probably Jupiter-family comets such as comet 67P/Churyumov-Gerasimenko.[15] Data from the Juno mission indicate that the dust close to Earth has a local origin in the inner Solar System, best fitting the planet Mars as a source.[16] 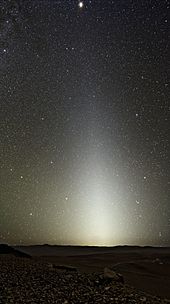 Zodiacal light is produced by sunlight reflecting off dust particles in the Solar System known as cosmic dust. Consequently, its spectrum is the same as the solar spectrum. The material producing the zodiacal light is located in a lens-shaped volume of space centered on the sun and extending well out beyond the orbit of Earth. This material is known as the interplanetary dust cloud. Since most of the material is located near the plane of the Solar System, the zodiacal light is seen along the ecliptic. The amount of material needed to produce the observed zodiacal light is quite small. If it were in the form of 1 mm particles, each with the same albedo (reflecting power) as Earth's moon, each particle would be 8 km from its neighbors. The gegenschein may be caused by particles directly opposite the Sun as seen from Earth, which would be in full phase.

According to Nesvorný and Jenniskens, when the dust grains are as small as about 150 micrometres in size, they will hit the Earth at an average speed of 14.5 km/s, many as slowly as 12 km/s. If so, they pointed out, this comet dust can survive entry in partially molten form, accounting for the unusual attributes of the micrometeorites collected in Antarctica, which do not resemble the larger meteorites known to originate from asteroids. In recent years, observations by a variety of spacecraft have shown significant structure in the zodiacal light including dust bands associated with debris from particular asteroid families and several cometary trails.

According to Alexander von Humboldt's Kosmos, Mesoamericans were aware of the zodiacal light before 1500.[18] It was perhaps first reported in print by Joshua Childrey in 1661. The phenomenon was investigated by the astronomer Giovanni Domenico Cassini in 1683. According to some sources, he explained it by dust particles around the Sun.[19][20] Other sources state that it was first explained this way by Nicolas Fatio de Duillier, in 1684,[21] whom Cassini advised to study the zodiacal light.[18]

The Islamic prophet Muhammad described zodiacal light in reference to the timing of the five daily prayers, calling it the "false dawn" (الفجر الكاذب al-fajr al-kādhib). Muslim oral tradition preserves numerous sayings, or hadith, in which Muhammad describes the difference between the light of false dawn, appearing in the sky long after sunset, and the light of the first band of horizontal light at sunrise, the "true dawn" (الفجر الصادق al-fajr al-sādiq).[22][23] According to the vast majority of Muslim scholars, astronomical dawn is considered the true dawn. Practitioners of Islam use Muhammad's descriptions of zodiacal light to avoid errors in determining the timing of daily prayers. Such practical descriptions and applications of astronomical observations were vital to the golden age of Islamic astronomy.

Use of the term "false dawn" in this context should not be confused with false sunrise, which is a different, unrelated optical phenomenon.