It took nearly twelve years to collect enough data for this high resolution gigapixel class mosaic image of the Milky Way.  Total exposure time used is around 1250 hours between 2009 and 2021.

The final photo is about 100 000 pixels wide, it has 234 individual mosaic panels stitched together and 1,7 gigapixels. (Click for a large image)

All the frames used are marked in this image. Since many of sub-images and mosaics are independent artworks it leads to a very complex mosaic structure.

" I can hear music in this composition, from high sparcs and bubbles at left to a deep and massive sounds at right."

From Taurus to Cygnus 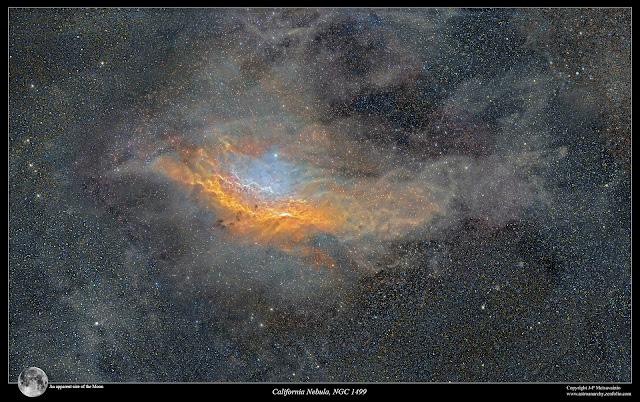 The California Nebula, NGC 1499, can be seen at bottom left of the large mosaic image.There are about 20 million individual stars visible in the whole mosaic image.
Orientation and details
Click for a large image 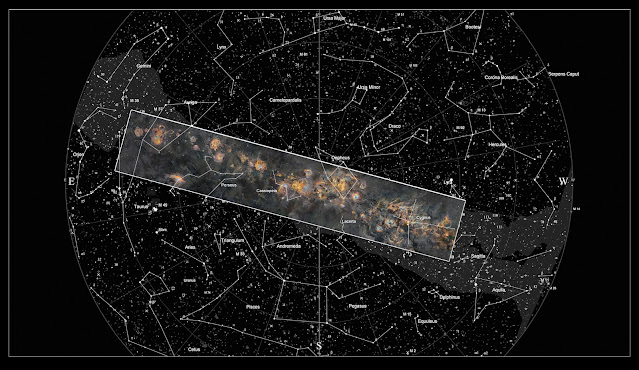 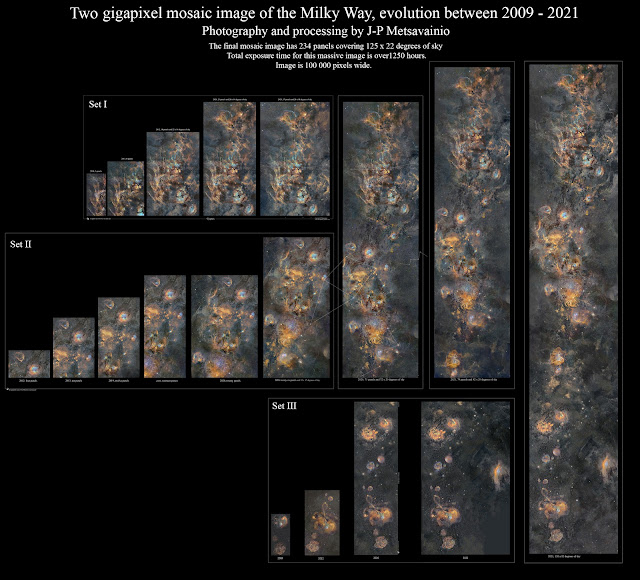 Image spans 125 x 22 degrees of  the Milky About 20 million individual stars are visible in my photo!

It took almost twelve years to finalize this mosaic image. The reason for a long time period is naturally the size of the mosaic and the fact, that image is very deep. Another reason is that I have soht most of the mosaic frames as an individual compositions and publish them as independent artworks. That leads to a kind of complex image set witch is partly overlapping with a lots of unimaged areas between and around frames. I have shot the missing data now and then during the years and last year I was able to publish many sub mosaic images as I got them ready first.

My processing workflow is very constant so very little tweaking was needed between the mosaic frames. Total exposure time is over 1250 hours. Some of the frames has more exposure time, than others. There are some extremely dim objects clearly visible in this composition, like a extremely dim supernova remnant W63, the Cygnus Shell. It lays about six degrees up from North America nebula and it can be seen as a pale blue ring. I spent about 100 hours for this SNR alone. An other large and faint supernova remnant in Cygnus can be seen at near right edge of the image. G65.5+5.7 is as large as more famous Veil nebula. There are over 60 exposure hours for this SNR alone.  (Veil SNR is just outside of the mosaic area for compositional reasons but can be seen in "Detail" image above.)

I have used several optical configurations for this mosaic image during the years. Up to 2014 I was using an old Meade LX200 GPS 12" scope, QHY9 astrocam, Canon EF 200mm f1.8 camera optics and baader narrowband filter set. After 2014 I have had 10-micron 1000 equatorial mount, Apogee Alta U16 astro camera, Tokina AT-x 200mm f2.8 camera lens and the Astrodon 50mm square narrowband filter set. I have shot many details with a longer focal length, before 2014 by using Meade 12" scope with reducer and after 2014 Celestron EDGE 11" and reducer.
Quider camera has been Lodestar and Lodestar II.

I took my current toolset as a base tool since it has a relatively high resolution combined to a very large field of view. Also it collects photons very quickly since it's undersampled and I can have very dim background nebulosity visible in very short time (many times 30 min frame is enough)

I do all my mosaic work under the PhotoShop, Matching the separate panels by using stars as an indicator is kind of straight forward work. My processing has become so constant, that very little tweaking is needed between separate frames, just some minor levels, curves and color balance. I have used lots of longer focal length sub-frames in my mosaic to boost details. (See the mosaic map at top of the page) To match them with shorter focal length shots I developed a new method.

Firstly I upscale the short focal length frames about 25% to have more room for high resolution images.Then I match the high res photo to a mosaic by using the stars as an indicator. After that I remove all the tiny stars from the high res image. Next I separate stars from low res photo and merge the starless high res data to a starless low res frame. And finally I place the removed low res stars back at top of everything with zero data lost. Usually there are some optical distortions and it's seen especially in a star field. Now all my stars are coming from a same optical setup and I don't have any problems with distortions. (I'm using the same star removal technique as in my Tone Mapping Workflow) 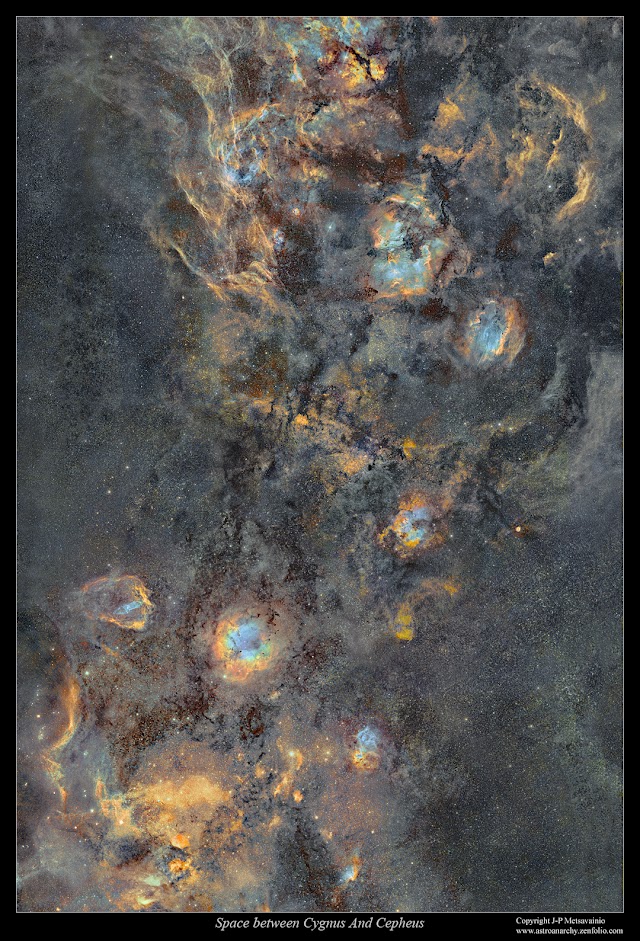 Image in mapped colors from the light emitted by an ionized elements, hydrogen = green, sulfur = red and oxygen = blue.
A 1:3 resolution close up from the photo above
Click for a large image, 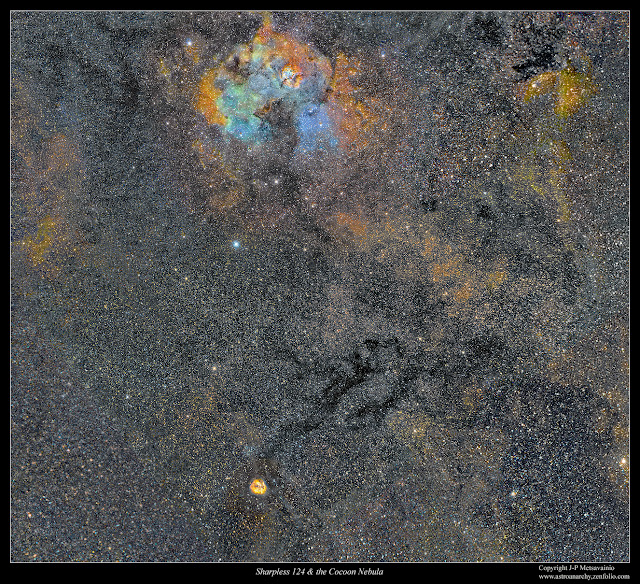 A closeup from the main image shows the Sharpless 124 at up and the Cocoon nebula with a dark gas stream at bottom.