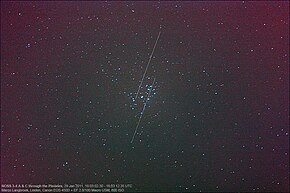 The NOSS 3-4 duo (2007-027A and C) crossing through the Pleiades. Movement in this 10 second exposure is from top to bottom, the A object is leading. 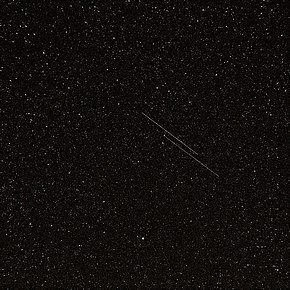 The system is operated by the United States Navy and its main purpose was tactical geolocation of Soviet Navy assets during the Cold War. The NOSS satellites operate in clusters in low Earth orbit to detect radar and other electronic transmissions from ships at sea and locate them using the Time Difference of Arrival technique.[2]

* One satellite from each third generation pair is officially catalogued as debris.
data from [1], [2]

The costs of the NOSS satellites (excluding costs for the launch vehicle), which were destroyed in a Titan IV launch failure in 1993, were US$800 million (inflation adjusted US$ 1.4 billion in 2021).[3]