As I hear stories about teams using a microservices architecture, I've noticed a common pattern.

This pattern has led many of my colleagues to argue that you shouldn't start a new project with microservices, even if you're sure your application will be big enough to make it worthwhile. . 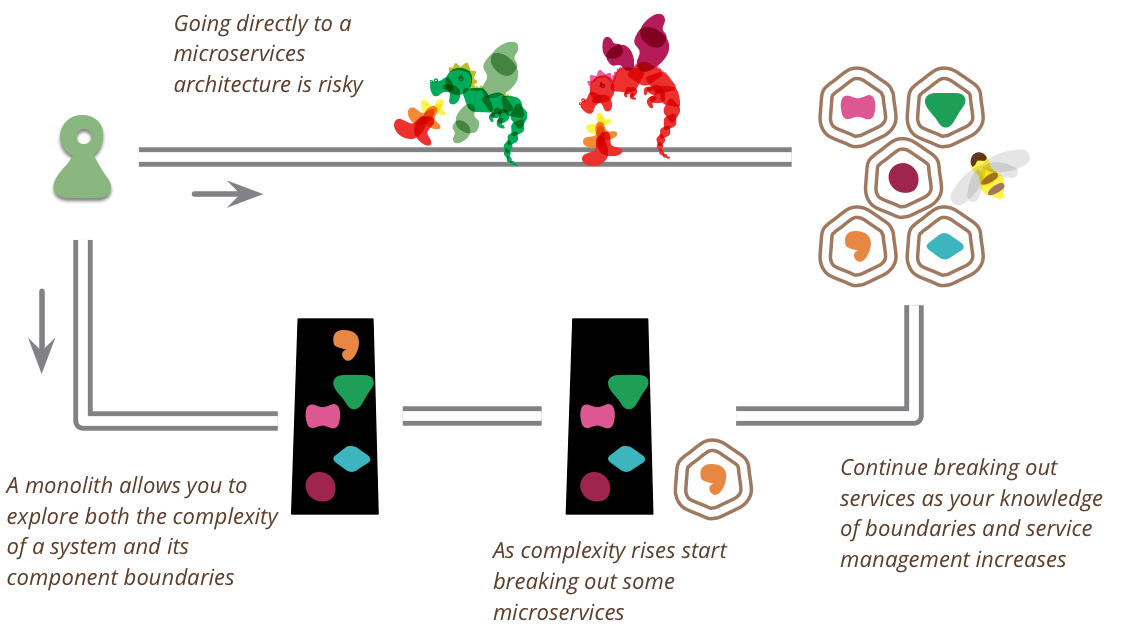 Microservices are a useful architecture, but even their advocates say that using them incurs a significant MicroservicePremium, which means they are only useful with more complex systems. This premium, essentially the cost of managing a suite of services, will slow down a team, favoring a monolith for simpler applications. This leads to a powerful argument for a monolith-first strategy, where you should build a new application as a monolith initially, even if you think it's likely that it will benefit from a microservices architecture later on.

The first reason for this is classic Yagni. When you begin a new application, how sure are you that it will be useful to your users? It may be hard to scale a poorly designed but successful software system, but that's still a better place to be than its inverse. As we're now recognizing, often the best way to find out if a software idea is useful is to build a simplistic version of it and see how well it works out. During this first phase you need to prioritize speed (and thus cycle time for feedback), so the premium of microservices is a drag you should do without.

The second issue with starting with microservices is that they only work well if you come up with good, stable boundaries between the services - which is essentially the task of drawing up the right set of BoundedContexts. Any refactoring of functionality between services is much harder than it is in a monolith. But even experienced architects working in familiar domains have great difficulty getting boundaries right at the beginning. By building a monolith first, you can figure out what the right boundaries are, before a microservices design brushes a layer of treacle over them. It also gives you time to develop the MicroservicePrerequisites you need for finer-grained services.

I've heard different ways to execute a monolith-first strategy. The logical way is to design a monolith carefully, paying attention to modularity within the software, both at the API boundaries and how the data is stored. Do this well, and it's a relatively simple matter to make the shift to microservices. However I'd feel much more comfortable with this approach if I'd heard a decent number of stories where it worked out that way. [1]

While the bulk of my contacts lean toward the monolith-first approach, it is by no means unanimous. The counter argument says that starting with microservices allows you to get used to the rhythm of developing in a microservice environment. It takes a lot, perhaps too much, discipline to build a monolith in a sufficiently modular way that it can be broken down into microservices easily. By starting with microservices you get everyone used to developing in separate small teams from the beginning, and having teams separated by service boundaries makes it much easier to scale up the development effort when you need to. This is especially viable for system replacements where you have a better chance of coming up with stable-enough boundaries early. Although the evidence is sparse, I feel that you shouldn't start with microservices unless you have reasonable experience of building a microservices system in the team.

I don't feel I have enough anecdotes yet to get a firm handle on how to decide whether to use a monolith-first strategy. These are early days in microservices, and there are relatively few anecdotes to learn from. So anybody's advice on these topics must be seen as tentative, however confidently they argue.