My first eBook - results & feedback from Serverless For Everyone Else

I wanted to write to you all and share that I've launched my first eBook called "Serverless For Everyone Else" - within the first three hours of launch, nobody bought a single copy and I thought that I'd got it all wrong.

The "everyone else" is a reference to how complicated and difficult cloud-based and Kubernetes-based FaaS has become. The eBook sets out to help indie developers, and individuals within corporations build and deploy functions using a new version of OpenFaaS (faasd) which is open source and can run on a single VM or VPS without much overhead.

The real power of functions comes in extending existing systems through webhooks, polling, or querying and updating state. I'll share some of these use-cases below including how I used functions to extend how the Gumroad marketplace worked.

Why write an eBook anyway?

Why did I decide to write an eBook? If you've ever written about tech or spoken at a conference, then Packt has probably approached you on LinkedIn about writing for them. From what I hear, that kind of arrangement means writing in a word doc, with tight deadlines and cranking out 300+ pages. It wasn't for me.

I'd seen Daniel Vassallo create an eBook about AWS and Twitter. Daniel had really good results using Gumroad to sell his self-published eBooks. Then there's Adam Wathan who built Tailwind CSS and trained himself up as a UI designer. He wrote his own eBook and in his yearly review mentioned that it did 600k USD in passive sales, without any promotion.

Whilst I didn't expect to get anywhere close to those numbers with a specialist topic, I did want to know if people would buy something from me.

The tiers at launch

I launched with three tiers, with names and clear differentiation:

As long as your options add some value, it seems that people enjoy the choice and are willing to pay a little more.

So I tweeted about the eBook and then nothing happened for three hours.

I interpreted this as a failure. I'd been reading "The Right It: Why So Many Ideas Fail and How to Make Sure Yours Succeed", and had convinced myself that this was a sign that nobody wanted the material.

Then I got my first sale, and felt a little relief, maybe I was wrong? 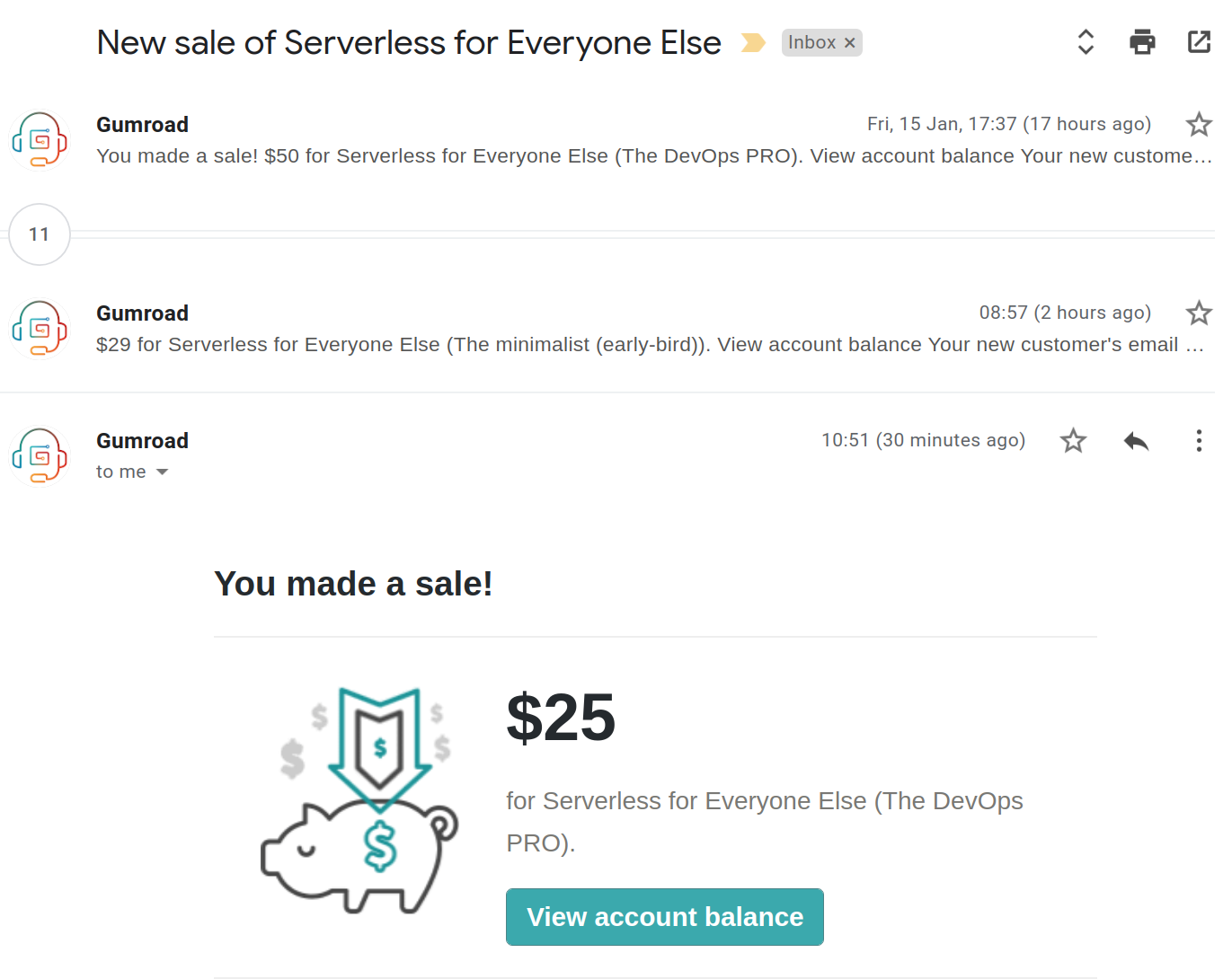 My sales graph had one initial spike on the Friday, and kept going into the Sunday. What had happened? My Twitter audience and GitHub Sponsors came to lend their support. 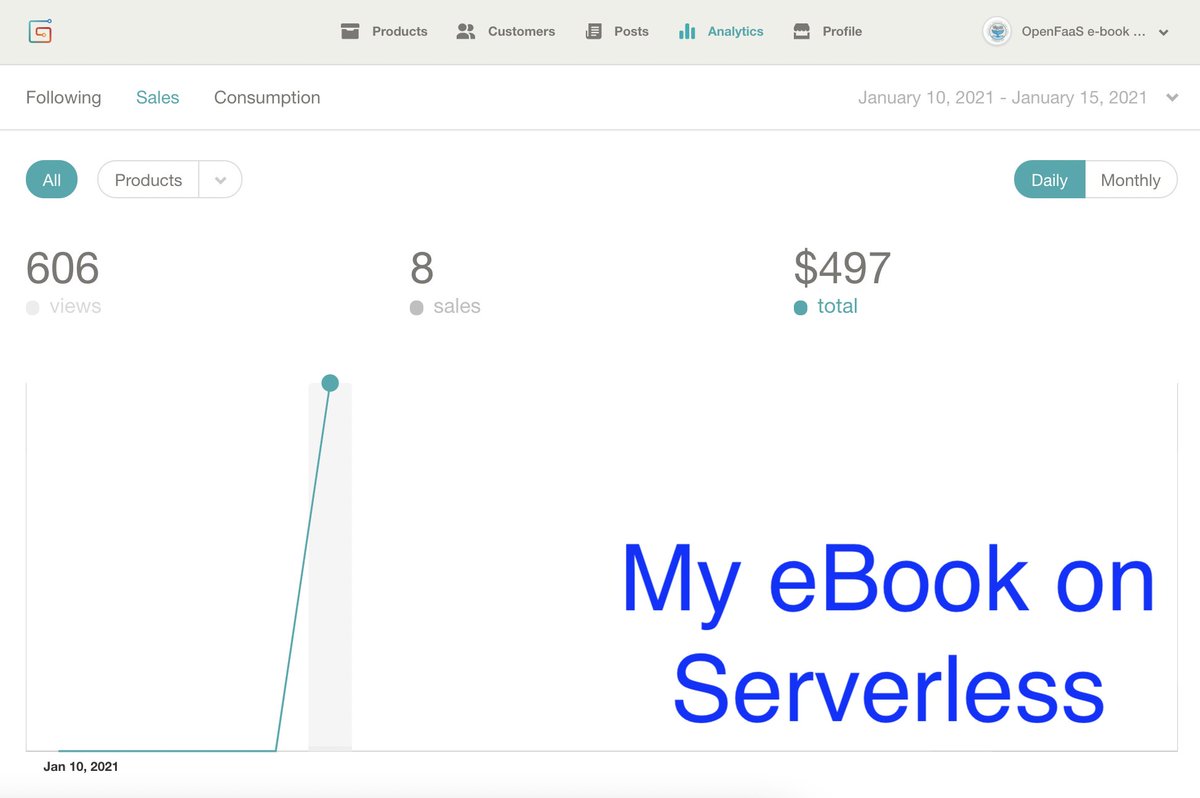 Then things died down, and over the course of the week I wondered if I'd failed to find market fit. Gumroad was sending me almost no organic traffic, and nobody was landing on the page via SEO.

It was still more money than I had expected to earn from the eBook within the first week, but I felt like with so much interest in OpenFaaS, that there was a broader audience to reach.

Getting a second peak

After the first week, I released the video workshop to the people who'd purchased that tier (99USD), and to get some feedback, I offered a free upgrade to the workshop for the tier just below (50USD). That resulted in another large spike in interest. 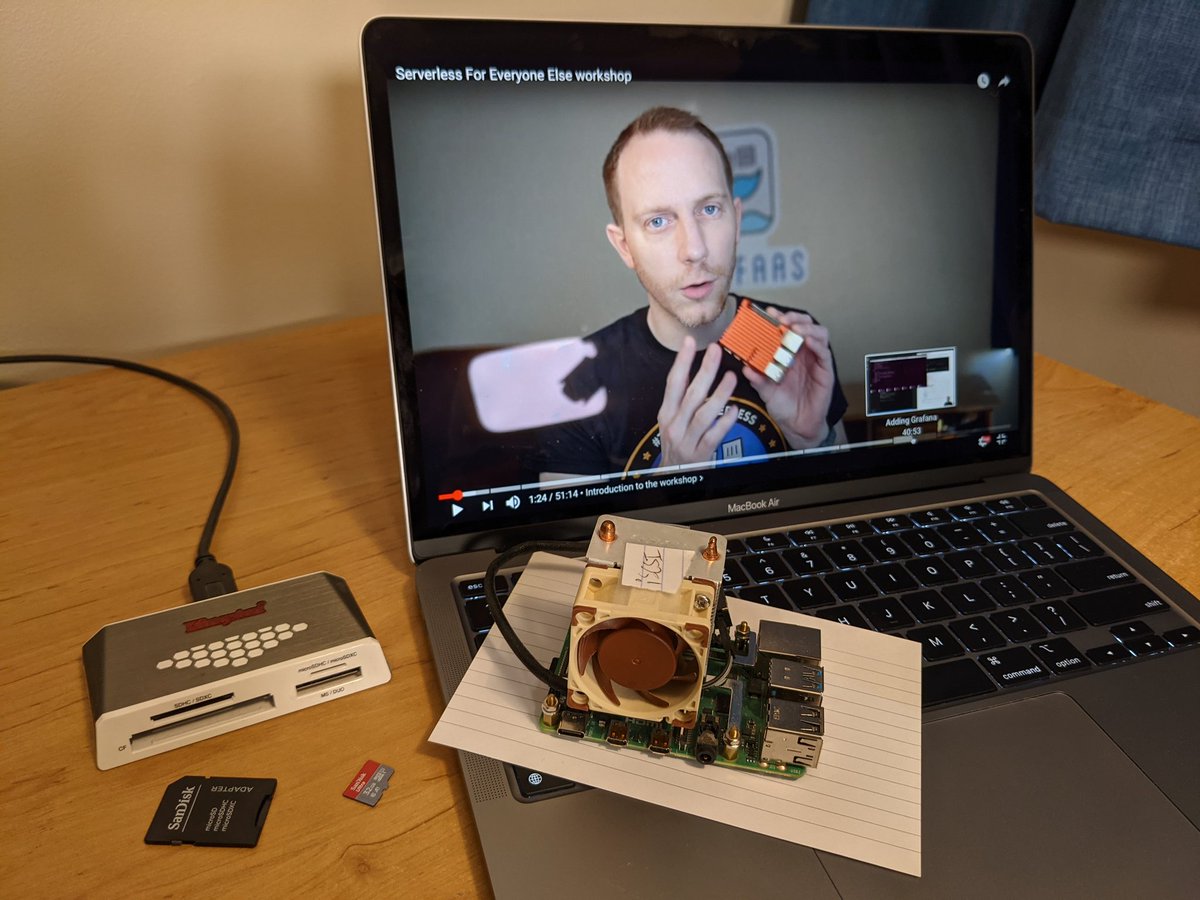 How did I fulfil the upgrade / discount? I did it by writing a function and deploying it to my Raspberry Pi, so that Gumroad would send a webhook, my code would query the dollar amount, and then send out an email to the customer over AWS SES.

Get the source code here: alexellis/gumroad-responder

After the second peak, I saw a complete drop-off again - and started to wonder why?

99% of referrals came from Twitter and email, so had I exhausted my network?

I went ahead and added a link on openfaas.com and on my blog at the end of each post, to try and get more views on the eBook. It's too early to tell if that is going to work out, but has resulted in a few conversions already.

One of the bits of feedback I got on the eBook was how users enjoyed the use-cases, and practical examples. I'd recently started video streaming, so invited a friend to my YouTube channel to talk about serverless use-cases. 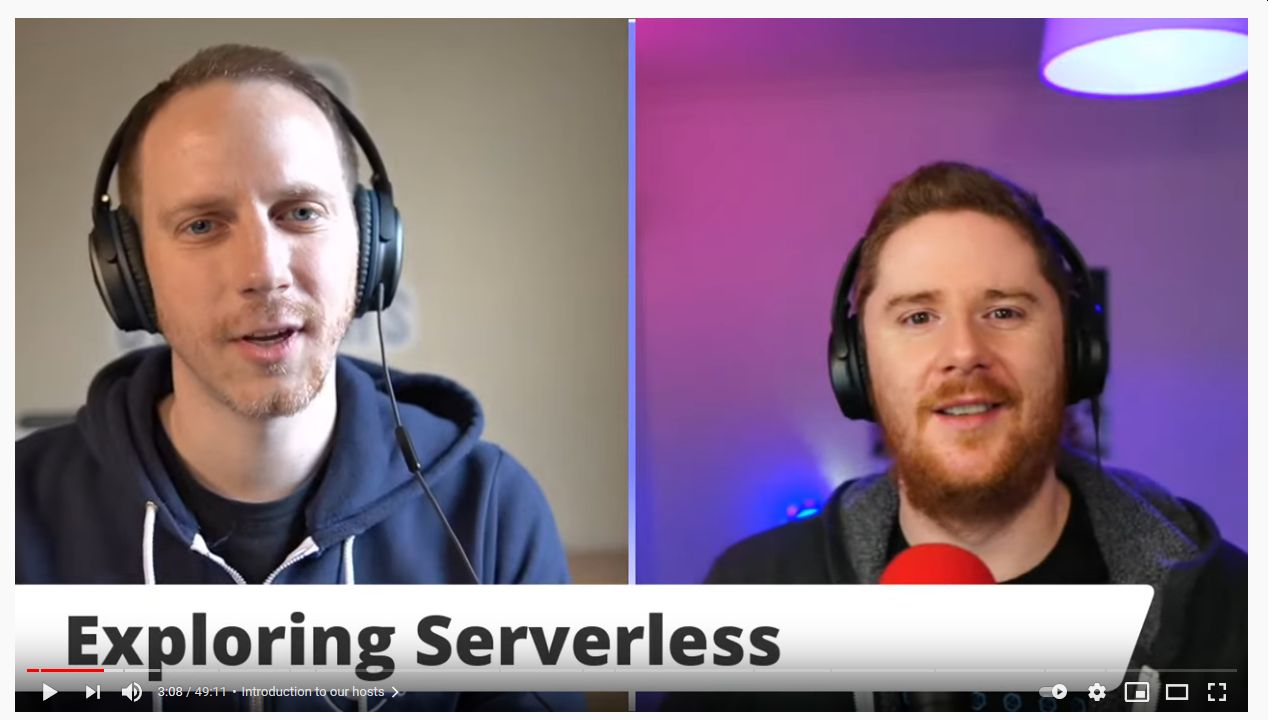 The recording generated a lot of interest and engagement for existing eBook customers, but no additional sales.

You can get the show notes here which have lots of links for use-cases from hobbyists, indie devs and corporate users of OpenFaaS.

I am pleased with the results so far, and have learned a lot along the way. I also had a few people reach out to me directly asking for help who had taken inspiration from seeing someone actually go ahead and take a calculated risk.

I haven't quite got to 10k USD, which is a nice round number to aim for, but I can roughly understand what each peak means here, and whether they are repeatable. 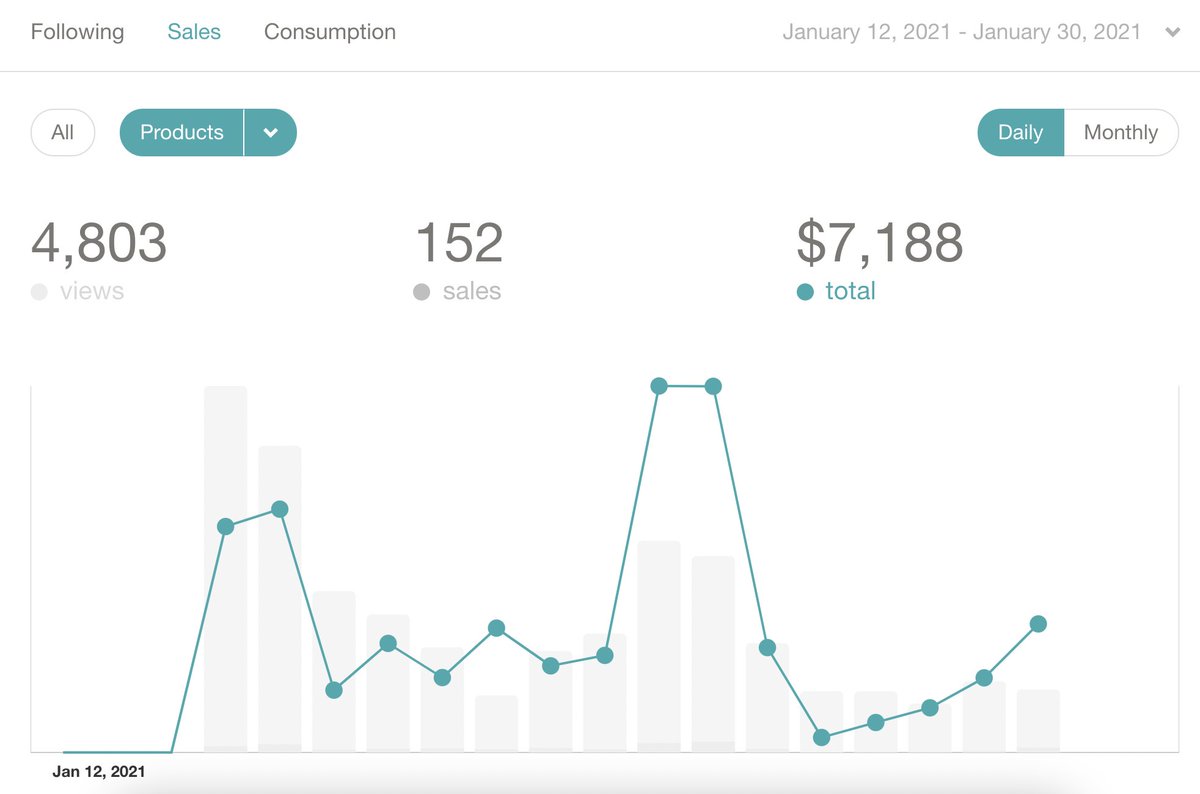 Once the sales do cross that threshold, I'll write-up a how to guide and share the command lines and tools I used to generate the eBook.

I committed to providing free updates - because the eBook was partially experimental and I wanted to validate that it was useful. Using the OpenFaaS Slack helped here - I opened a new channel for people who'd bought the book, and enjoyed the feedback and engagement from this.

Some people charge extra for community, but it felt too hard to enforce the access for this. 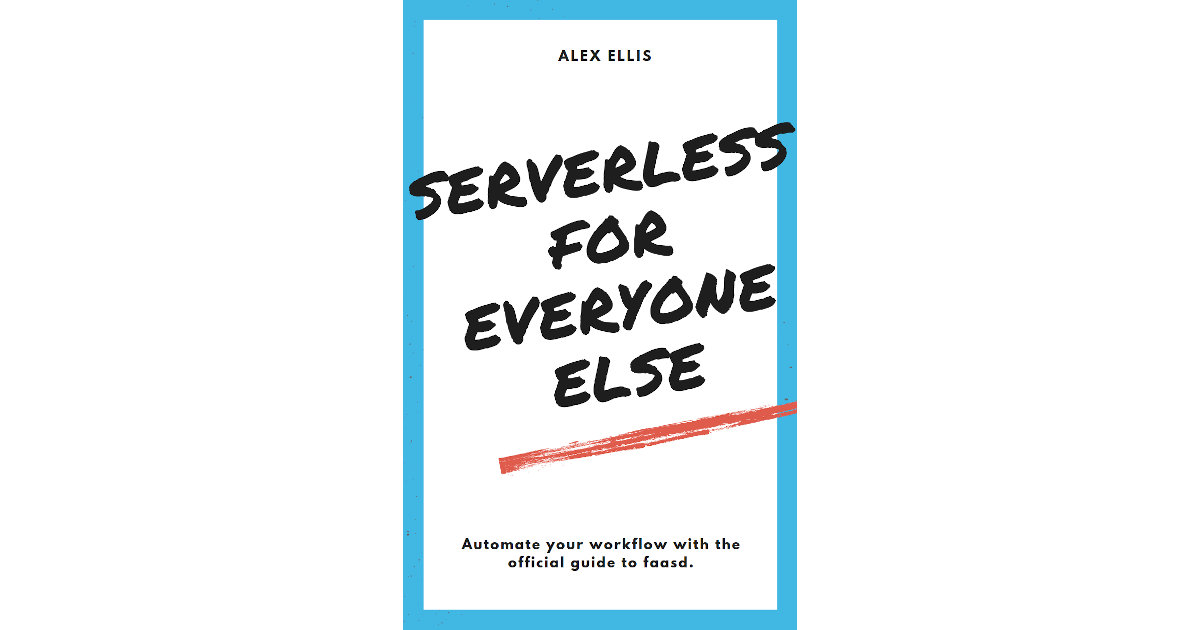 I generated my own eBook cover originally and then only later, got a professional designer involved.

It turns out that the cover may not matter with Gumroad, as long as it's not awful. Since changing cover, I've only seen two new sales.

Now that I have some initial feedback and have learned that people will buy things from me, I want to let goodwill rebuild, and my audience "recover" before launching a second eBook. I've done a lot of free blog posts and writing on Kubernetes, Docker, Golang and Raspberry Pi and analytics from my blog shows me what's popular.

In 14 days, I've received more money than OpenFaaS corporate users have paid into the project over 4 years.

Just because something you give away for free is popular, doesn't mean that anyone will be willing to pay for it. OpenFaaS itself is testament to that, with many corporations using it in production, without contributing code or finances back.

The Right It has taught me not to invest too much effort up front in any one idea - as it's likely to fail. Instead I'll be testing ideas - getting feedback by investing a few hours or days, not weeks.

I am sure I've missed out lots of details here, so feel free to ask me questions.