A GitHub workflow for Elixir releases

Elixir 1.9 comes with support for building releases so I created a GitHub workflow that builds and publishes a phoenix application release to GitHub releases.

Update: I’ve updated the workflow as there was an issue when the master branch filter resulted in a neutral result, it stopped running the tests.

Since Elixir 1.9 hasn’t been released yet I created a new elixir action that contains elixir 1.9.0-rc.0 so we can take advantage of the new features.

I also needed an action with elixir & postgres so I can run the tests (GitHub actions don’t currently allow you to link a postgres container). For conveinence this is using elixir 1.8.2 since there are no official elixir 1.9.0 containers yet, this will use the same version eventually.

Finally I needed an action to publish the release to GitHub, this bundles the ghr tool to make this easier.

The resulting release is built when the master branch is updated and is versioned automatically. For this to work properly you need to have a version tag eg. git tag -a v1.0 -m 'v1.0'. 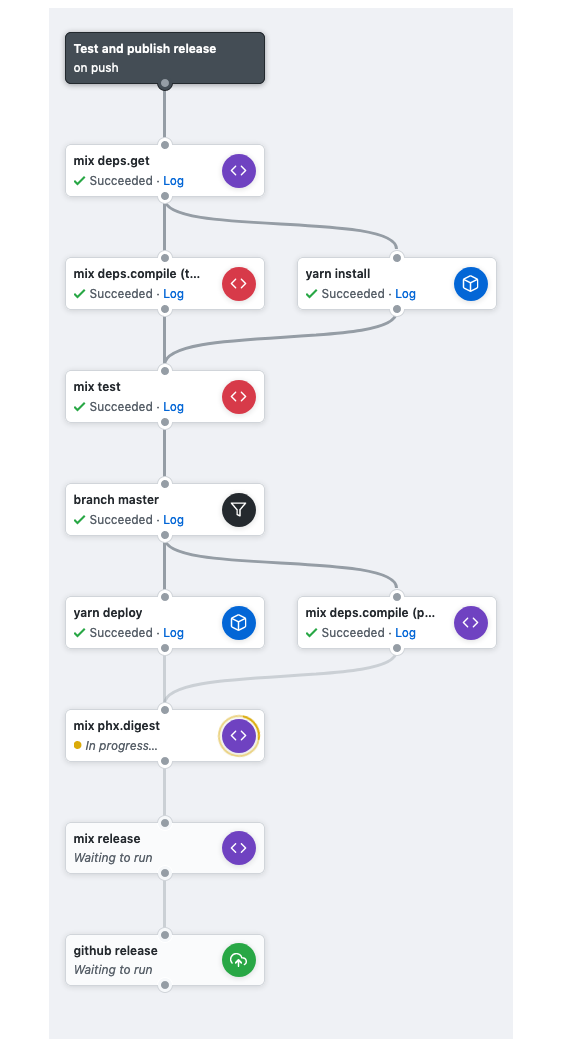 This is the workflow source

The resulting release is available in GitHub

It took a while to get the dependencies set up correctly to take advantage of as many actions running in parallel as possible but I think it is now fully optimised.

The whole workflow takes about 7 minutes to run, which is mainly because GitHub actions don’t currently support any form of caching. I’m looking forward to the launch of GitHub releases this summer, hopefully a lot of these features will be included.

Next I’m looking at building a workflow that triggers on a new release, downloads and runs it and then executes a suite of acceptance tests driving a headless chrome browser. If the tests pass then it will automatically deploy the release.

If you have any tips or feedback please get in touch via Twitter.